What is Sleep Apnea? Symptoms, Causes and Treatment 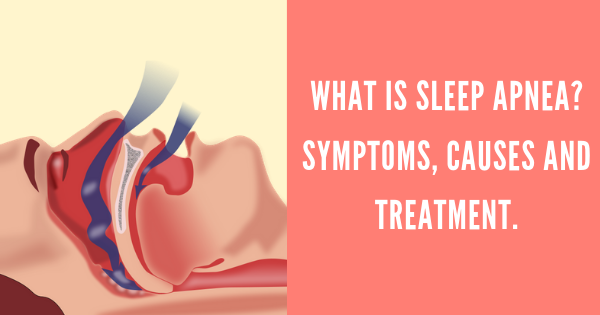 Is your significant other waking you up in the middle of the night asking you to quit snoring? Do you wake up feeling like you are choking or can’t breathe?  Even worse, do you wake up tired after getting 8 hours of sleep?  You might want to get checked for sleep apnea.

If you’ve come to learn that you are suffering from this disorder, you are not alone. An estimated 22 million people suffer from sleep apnea. And, this is the reason that the condition is finally showing itself in the limelight.

What is sleep apnea?

Sleep Apnea is a disorder that causes you to have abnormal breathing—primarily during sleep. More often than not, while you are sleeping your breathing repeatedly stops and starts.

It can be characterized by two different elements–an apnea, which is a pause in breathing while asleep or a hypopnea which is an episode of abnormal shallow breathing or an abnormal respiratory rate.

These episodes can last from 10 seconds to minutes and can occur anywhere from 5 to 30+ times in an hour.

What are the types of sleep apnea?

There are three different types of sleep apnea.  And each one has its own characteristics.

Think of central sleep apnea like the brain going to sleep.  And, because the brain is sleeping, it doesn’t signal the muscles to breathe.

Complex sleep apnea is complicated because it’s a combination of both types of sleep apnea.

How is Sleep Apnea Caused?

Sleep Apnea be caused by additional thickened tissue or excessive fat around the airway. This can create the rhythm of breathing to malfunction, and any air that can pass is what causes the loud snoring.

Another way sleep Apnea can be caused is by the muscles in the back of the throat relaxing.  When the muscles relax, it narrows the airway or closes as you breathe.

If your doctor suspects that you have sleep apnea, he will order one of two different tests.

You’ve probably heard of this test.  In lay terms, it’s called a sleep study.  You actually have to go to a sleep center for the night, and they monitor you when you sleep.

During the exam, you’re hooked up to equipment that monitors your heart, lung and brain activity, breathing patterns, arm and leg movements, and blood oxygen levels while you sleep.

Your doctor might provide you with simplified tests to be used at home to diagnose sleep apnea. In this case, you are given tools to take home and put on you during the night.

How to treat Sleep Apnea

Many doctors treat sleep apnea with a big breathing machine.  To many, this is a turn-off.  Some feel it disrupts their spouse’s sleep.  Others feel confined by it.  But there is an alternative.

A dentist can design an oral appliance specifically for you. It is to be worn in the mouth during sleep, and it can significantly help your sleep apnea.

The device will help maintain an open airway in the throat during sleep. And, many people who suffer from sleep apnea prefer their oral device over the big machines for several reasons.

If you think you may have sleep apnea, schedule an appointment at NYC Dental Office Today to get yourself feeling better!

A periodontal (gum) disease can lead to cardiovascular issues
March 2, 2022

Overcoming fear of the dentist
January 26, 2022

Sugar-Free is Good For the Waistline but Bad For Smiles
October 20, 2020